In terms of rainfall this week, for the most part it will be dry with the majority of any wet weather affecting the far north and particularly the north west of the UK. Any rain will generally be downpours away from the extreme northwest, where there could also be more persistent episodes. As we head into the weekend, we may see a band of steady rain rolling down from the northwest, eventually bringing a change from the nice warm weather, and we may also have to watch out for some thundery showers. and to storms affecting the south and central around this time as well – but that’s very uncertain at this point.

Looking in a bit more day-to-day detail, Monday will start well for many in England and Wales but cloudier for Scotland with some showers affecting the North West. As the day progresses, cloudiness will increase in England and Wales, particularly in the central and eastern regions. Some showers will also feed other parts of northern Scotland, with a few feeding further south and into the northwest of England – but they will be very rare and far between. Temperatures will generally hover between 14 and 18c for the northern half of the UK, between 17 and 21c elsewhere.

On Tuesday, showers again affect the north and especially the north-west of Scotland, but elsewhere it is sunny, dry and increasingly sunny, as high pressure exerts its influence with temperatures of 21-24 ° C widely in England and Wales.

Wednesday will be similar again, with plenty of sunshine away from the far north and northwest, where there will be a scattering of showers. Temperatures are expected to rise another notch, with highs of 26-28C. 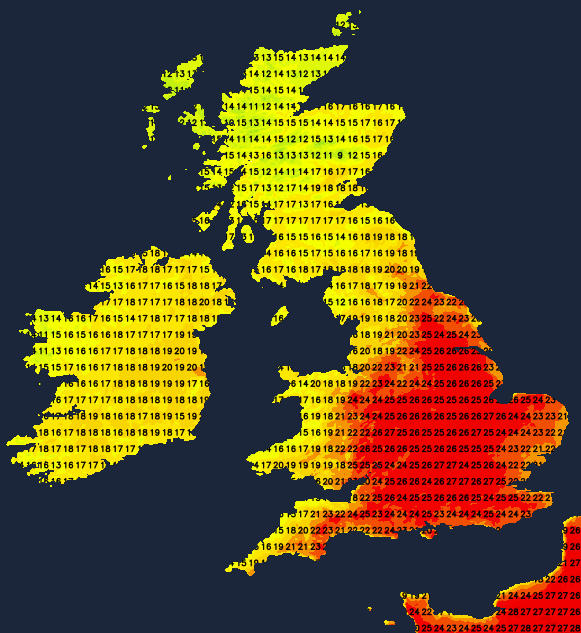 A weak front could bring more clouds across the country on Thursday, but it will still be very warm to hot, especially in the south and southeast during sunny spells. On Friday, we could see this warm air plume kick in, pushing temperatures even higher.